Are you the one in the picture who just keeps on going knowing there is something good at the end of the tunnel or are you the one who turns around and gives up when you were, oh, so close? How do you know if you don’t keep going? Persistence is a vital skill that every good sales person needs. You as a sales person, need to stay motivated and continually stay focused on your prospect, dig in and stick with it.  Stay engaged and have a strategic plan to contact your prospect in a variety of ways, whether it’s through email, phone calls or social media. You need to be creative. There is a thin line between being politely persistent and a nuisance, especially given the amount of time that must be spent with a prospect before a sale is made.  Understanding how to be politely persistent is key to being a good sales person. Being persistent without being annoying is one of the hardest skills to learn as a salesperson, but also one of the most important. You have to go beyond just calling because people are so busy with their day to day job, they can’t always call you back, even if they want to. Here’s a quote I like to think about when I am having a hard time reaching people,  “be kind every day, because everyone is fighting some kind of battle you know nothing about”.  It could be that your prospect is very interested in your product or service, but they just had two new projects dumped on them by the CEO and have no time to call you back or their best sales rep just quit and they are so far behind they don’t have time to call. Whatever the reason is, it’s out of your control. All you can do is continue on with a positive attitude. I like to keep this image on my desk to keep me motivated in sales. Don’t give up! Keep on going and don’t take the calls or emails that don’t get returned personally. 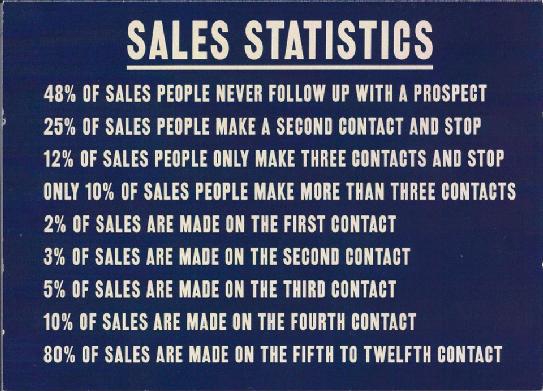 As noted in the image, it’s been said that most sales are made after five to twelve contacts with a prospect. However, most people tend to give up after just three or four attempts. If 90% of sales people give up, don’t you want to be the 10% that keeps on going and gets the deal. I know I do. One thing to keep in mind during the process, don’t get too cranky or lose hope, because if you’ve done your job correctly you should know the prospect is worth continuing with the process. If you haven’t done your due diligence, this may be the time to recognize that too. Decide if it’s worth your effort to keep going on or perhaps this prospect will never say yes.  Learn to recognize the signs that your prospect is giving you. Getting your prospect to sign on the dotted line is the goal of all sales people, but it’s the ones who are persistent and have executed a solid strategy and a keep in touch plan that close the most deals.  Don’t be the guy who lost out on the diamonds because you gave up too quickly. Be the sales person that wins the deal, be persistent and stick with it.