My background has been coaching college football, but I recently switched careers and I asked a few people for advice. One of those people was Jacco van der Kooij and one of the pieces of advice he gave me was “SHARE YOUR PASSION.” My passion is teaching. And I don’t mean like a teacher in a classroom but as a mentor and a leader. I love the whole process of teaching, like figuring out what makes each individual team member tick, what motivates him/her and how he/she learn best. I love seeing that “aha” moment when what you are teaching them all of a sudden makes sense. But the best feeling is watching your team celebrate after they have reached their goal because they utilized all the skills you have taught them. They put in the effort and the work and it paid off. 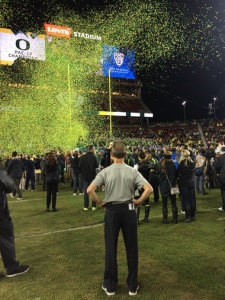 Leadership and management in athletics is very similar to leadership and management in the business world. I have been fortunate enough to be around some great coaches, and I got to learn a lot; some by watching them and what they taught, some by learning from their mistakes and some by my own trial and error. And those are the ones I want to share with you. I got my start in coaching as a Graduate Assistant at my alma mater, the University of Oregon. During parts of practice I would be in charge of teaching a small group of defensive lineman. This was a big opportunity to gain valuable hands-on experience. One day one of the student-athletes, we’ll call him Bill, refused to follow my instructions and do what he was asked to do. I was a young coach and new on the staff, so I felt I had to set the tone for Bill and anybody else who wanted to challenge my authority in the future. Eager to assert my power, I held him accountable for his action and punished him by giving him “rolls.” If you don’t know what “rolls” are just lay down your back and start rolling like a little kid rolling down a hill. Try not to get nauseous. 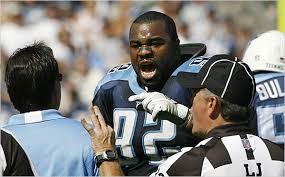 A good stiff punishment is anywhere from 250-500 yards of rolls, but after Bill refused to comply I doubled down AND tripled down and ended up giving him 2000 yards of rolls. This is probably the equivalent of giving a track athlete 15 laps around the track or a basketball player 30 suicides. Soon after that incident, which at the time seemed like a major victory for me, I was called into the head coach’s office to explain my side of the story and the sequence of events. Mike Bellotti has been a good mentor to me. He could have leaned into me pretty good, which I undoubtedly deserved, but he didn’t. He did what a good leader does. He used that incident to teach me something about leadership. My victory lap soon became a major humbling experience and a great lesson that has lasted and held true till today. Coach Bellotti told me that my NFL experience, being a 3rd round draft pick, and being a contributor to the Oregon programs success during my tenure didn’t mean a thing if I could not communicate and motivate my players. My purpose for being there with Bill and the others was to assist them in reaching their maximum level of production, not to bully young men. As a manager it is my job to reach, teach, and guide each team member. I failed to communicate what value I brought to the team, and I held him accountable for not meeting expectations I had never set. Needless to say our working relationship was strained from that day on, and for my next two years on that staff I was never able to recover from my mistake. But as I grew in my career and became a better coach I also become a better communicator without having to assert my power, with a few exceptions of course. Ask Mike Dominguez about the breakfast club.