This picture pretty much sums up my recent experience with a client.

Back in the “dead time” (after Thanksgiving- End of January when business just seems to shut down), I was desperate for a client. One client had recently downsized the size of a projected project and really put a big hole in my budget. In order to band-aid this temporarily, I went to the internet to find an ad-hoc client.  Well, as the internet usually does, it provided, but not without a catch. 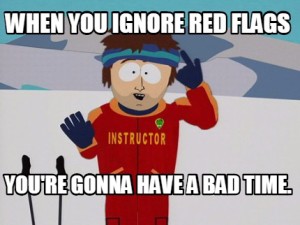 While prospecting this client, several red-flags were raised.  However, out of fear that I wasn’t going to find anything else (which is completely unrealistic) , I took the contract. Fast forward a month and a half, I’ve had to deal with the following headaches-